In today’s world, both at home and at work, and Critical Reflection Essay Of Cultural Awareness On Cultural Intelligence has become diverse and increasingly global. In a space where it’s the boiling pot of multicultural diverse manpower it’s important to understand the Cultural Awareness and thus derive the Cultural intelligence for better communication, organizational standards etc. the awareness of diversity in the global context is huge today than it was before due to many factors like growth, diversification, Organizational Culture building process etc. In the work situation of today, the subject has become important to study to build an Organisational Culture and Behaviour around the aforesaid and develop effective Cross-Cultural Communications. Let’s hereby understand both of them in the Critical Reflection Essay in context of International Business. 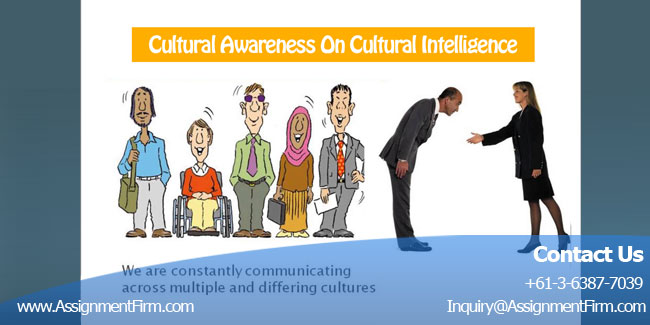 In the diverse world, each one that we meet has their own culture and we do have our own. The Cultural awareness gives the foundation of communication that involves knowing one’s values, belief system and perceptions. It’s about understanding about the ways one behaves, reacts, and views things around him. Cultural awareness becomes central when one is interacting with another one; to be aware of the behaviour of the other to avoid miscommunication and make meaning of the ideas communicated (Kim, 2011). Cultural awareness is an important step towards Critical Reflection Essay and cultural competence.

Cultural Intelligence (CQ) has become increasingly important in term for Business, Education and Governance. This can de coined as the Capability to work in a cross cultural environment effectively with the capacity to relate with other cultures. A Researched based way of predicting and measuring intercultural performance (Ang, 2010) also called CQ in regular Business terminology.

When a Personnel is aware of the diversity of Cultures around like how similar or diverse it is. A person’s ability to adopt in a diverse environment can only happen with his Cultural Awareness like knowledge of Economy, Legal systems, Social norms and beliefs, Religious Outlook, Social Linguistic knowledge etc for a better interaction in a diverse environment (Dyne, 2011).  Thus through cultural awareness, a manager or Organization can develop upon the verbal and non-verbal communication ways thus generating Cross Culture Intelligence to execute the effective ways to communicate in a diverse environment. It helps in Building Strategy before appearing in front of culturally diverse environment (Spencer-Oates, 2012). By making judgements about one’s own thought process to that of others, through Cultural Awareness one can develop the Cultural Intelligence and strategize the tone, accent, greetings, words etc. Cultural Intelligence in action is a person’s ability to adapt in a cross Cultural Environment having the awareness thus choosing the communication strategy likewise.

Rodriguez (1998) suggests that it’s very important for all to have Cultural self awareness. Cultural self awareness is becoming aware of one’s own cultural identity. It’s to look into oneself for weakness, fears, strengths, biases, goals and motivation etc. Our own cultural awareness is very important for a cross cultural interaction. To understand and to be aware of cultures aids in value and beliefs of those we are interacting with. For an example the concept of joint family for Hindus who have extended family living together in the same home it’s a part of the Social Structure. Again if we see the popularity of Hip Hop music, it mostly is associated with young people, but all young people (Morkel, 2011). Thus these groups have their own identity, taste and opinion. So once we understand the values of different cultures it becomes clear to us how they think or react to particular stimuli, thus enhancing our interaction skills while communicating.

Let’s look into the Theories of Cultural Awareness and its interpretations. Spencer-Oatey (2012) suggests that Culture is associated with a social group that shares the same value for a product. It’s often wrongly assumed that Culture is based on Nationality or all members of a particular group have the same characteristics, getting us into stereotyping. The 3ps of Culture are explained as Product, Practice and Perspectives. Of which product is the Codified aspect of culture, for example Cloths, Furniture or less tangible aspects like words, Grammar or tone of one’s language. Practice is defines as the pattern of the behavior like driving on the Left hand side of the road, shaking hands or bowing, patterns of speaking etc . The norms those reflect the typicality of a social group habits. Perspective are the deep often unconscious attributes and values that we hold in life like respect for elders, modesty and the importance of independence and self sufficiency (Livermore, 2012). All these that we explored in turn and consider how they may affect life in workplace help us to develop the Cultural Intelligence for effective cross cultural communications. In action the 3Rs of Practiced cultural intelligence are Report, Reflect and Re-evaluate inter cultural encounters to help people handle others in a more efficient ways in a Cross Cultural environment (Dyne, 2011). Thus while developing Cultural Intelligence the actions have competence maker, 4Is as in Inspect, Identify, Innovate and Integrate for Intercultural development and make the competence effective in Intercultural Communications.

When we have the sense of Cultural Intelligence the Intercultural Competence grows anyway. We learn to react with a Particular group that have a different taste or view of a subject. Thus as Worthy (2010) defines it as to understand the groups behaviour that serves peoples goal. The aspirations of different people are different in accordance to their perspective of satisfaction, thus while arranging the Organizational Goals and Objective the Critical Reflection Essay on cross-cultural reference helps in organisational Management quiet suitably. The Actual understanding of the Cultural diversities and acquiring the Intelligence well many a Communication gap can be met effectively. In Organisations of today where people resources are of the diverse and broad base can compete with other businesses (Dyne, 2010). With proper Cultural Intelligence, the handling of New Business Ventures or Taking the Business into different places can happen with much ease. New Opportunities to bloom can happen when Cultural Intelligence would be entwined with The Strategic Growth of the Business (Kim, 2011).

The Global Business is taking the People of different Background to places. In UK itself we find the Multiculturalism has taken the seat. Thus in such a vibrant environment where the communication to Organization Building is multi Cultural the Multicultural Awareness generation and thus putting the evaluated Cultural Intelligence into place, is the need for Business managers to understand.  New valuations are done each day to reach more and more crowd by a business where it is Internal Customers or External. The awareness of Cultural Values and acquiring the better Cultural Intelligence is the key for developing Policies in HR or Strategies in Marketing. The Cultural Awareness for self or for others is now a subject of studies for many a people who wish to develop Intercultural Competence for future business trends.

Get BUS707 Managing Across Global Cultures Assignment written by professionals